A marvelous first-half display set Newmarket firmly on course for an impressive victory over Brian Dillon’s, the city champions, in the replay of their junior football championship semi-final at Kilmurry on Sunday. 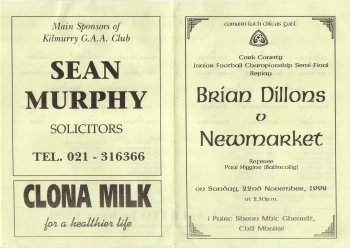 END_OF_DOCUMENT_TOKEN_TO_BE_REPLACED

NEWMARKET and Brian Dillons will have to meet again this Sunday in Kilmurry in the replay of the Co JAFC semi-final. 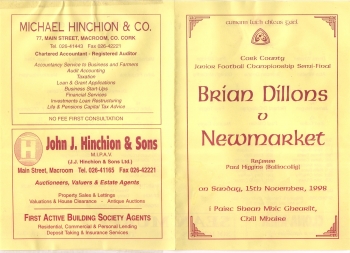 On Sunday last in dramatic circumstances Brian Dillons, with a late rally, forced the equalising point that has now led to next Sunday’s replay and the postponement of the final. The game never reached the heights expected and the number of wides kicked by both sides was enormous when one considers there was no wind. The game was played in dry, calm, heavy conditions.

END_OF_DOCUMENT_TOKEN_TO_BE_REPLACED

Newmarket qualified to meet city champions, Brian Dillons, in the county junior football championship when they scored a decisive victory over Crosshaven, the Carrigdhoun representatives in a tough contest at Glantane on Saturday. 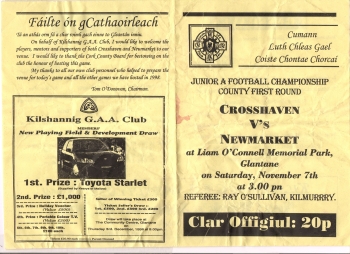 The final score might suggest that this was an easy canter for Newmarket but far from it. They were by far the more accomplished side all through and had the game more or less sewn up by half-time when they led by 1-6 to 0-1 but Crosshaven were a physically strong, hard tackling side who played with great vigour and certainly left the Duhallow champions aware that they had been in a game.