Some new images have been added to the Gallery, the 1973 Hurling League Champions and 1973 Minor Football Champions. 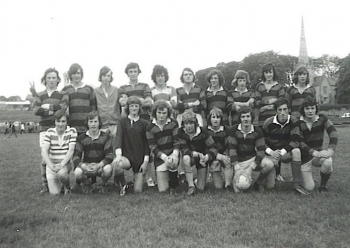 Thanks go to Johnny Charlie O’Keeffe who was the source of many of the pictures already in the archive as well as Con O’Sullivan & Danny Hourigan for providing the details.

An open players and club meeting will take place on Friday evening, November 24th at The Field. Players and selectors are asked to attend at 8pm. The public meeting will begin at 9:30pm and is open to all.

Newmarket’s minor footballers retained their Duhallow league title and in the process completed a championship and league double in the division for the second year in succession. In the final at Kanturk on Sunday, they defeated the home side by 1-11 to 1-7 in a repeat of the championship final.

The home side began brightly putting two points on the scoreboard. Newmarket were slow to settle and depended on their rearguard during the first half with John Scanlon and David Guiney in outstanding form throughout the hour. Nicky Flanagan converted a free after seventeen minutes for Newmarkets first score with Kanturk quick to regain their two point lead. John Lane punched a point for Newmarket but Kanturk again responded with a fourth point. Newmarket finished the half very well with points from Nicky Flanagan and John Ryan tieing the sides for the first time in the game. Newmarket maintained their momentum and driven on by the forward surges of Bart Daly they took the lead for the first time through a Jerry McCarthy point. Nicky Flanagan was again on target to leave Newmarket in front by 0-6 to 0-4 at half time. END_OF_DOCUMENT_TOKEN_TO_BE_REPLACED

Welcome to NewmarketGAA.com, the official website of the Newmarket GAA.

On the site you will find all the latest news along with fixtures & results, a gallery containing photos old and new, information on how to contact us as well as a history of the club and much more.

The site will be continually updated and welcomes all suggestions. If you have an idea or some information please send an e-mail to website@newmarketgaa.com. Also see the submit page on how to send us items such as match photos or internet links.

The Annual General Meeting of Newmarket GAA Club will take place on Sunday, November 19th at the James O’Keeffe Memorial Institute at 4pm. All club members are requested to attend.