NEWMARKET won their eighth Duhallow football title, and their first since 1993, when they beat Millstreet by a point in a thrilling final at Banteer on Sunday. 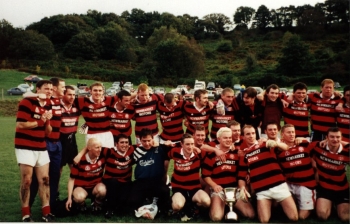 The closing stages were packed with drama when Millstreet cut the margin to the minimum with two minutes of ordinary time left, and battled unavailingly for the equaliser in the remaining five minutes of play, with three minutes of injury time being played.

END_OF_DOCUMENT_TOKEN_TO_BE_REPLACED

Newmarket qualified to meet Millstreet in the Duhallow football final, when a late goal proved crucial in their two point victory over Kanturk in a thrilling semi-final played before a big attendance (gate receipts £4,020) at Boherbue on Sunday. 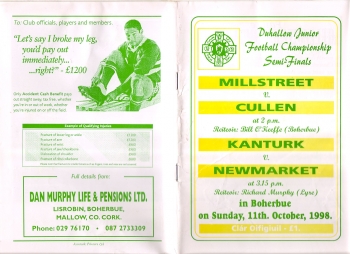 The goal came a minute before the end of normal time, when Michael Cottrell took the ball on a solo run through the Kanturk defence before giving goalkeeper Colman Lane no chance with a shot from close range.