A stirring all round team effort enabled Robert Emmets to claim the Duhallow Under 21 B Football Championship Final, on defeating a well fancied Boherbue side by 2-8 to 0-10 in dreadful conditions at Newmarket on Sunday afternoon. 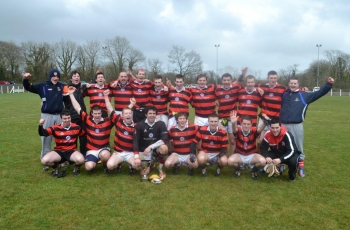 END_OF_DOCUMENT_TOKEN_TO_BE_REPLACED

Congratulations to T.J. Brosnan on winning a Munster championship medal and to the Cork under 21 football team on their victory over Tipperary, in the Munster Final played at Thurles last Wednesday night. T.J. lined out at right half back and the team now progress to play Cavan in the All Ireland semi final at Tullamore next Saturday.

Congratulations also to Donal Hannon who was a member of the Cork minor hurling panel that defeated Clare on the following night in the Munster Championship played at Páirc Uí Rinn. Donal has the distinction of being the first Newmarket hurler to represent Cork at this level since 1974.

A depleted Newmarket were somewhat unlucky to be defeated by Lyre in the Ducon Cup, played in wet and miserable conditions at Banteer on Sunday afternoon. The home side ended victors on a scoreline of 0-11 to 0-6 but a wasteful Newmarket will rue ten first half wides when with the aid of the wind they failed to capitalize on numerous scoring opportunities.

END_OF_DOCUMENT_TOKEN_TO_BE_REPLACED

A strong second half showing enabled Robert Emmets to overturn a half time deficit of two points to run out victors by 0-14 to 1-6 against Dromtariffe at a chilly Tullylease on Saturday evening . A tally of nine points, some of sublime quality from full forward Daniel Culloty proved central to the outcome.