Newmarket bow out of the Duhallow Cup

Newmarket bowed out of the Duhallow Cup at the semi final stage, when they suffered defeat against Boherbue by 2-10 to 1-9 in a keenly contested game played at Kiskeam on Tuesday night.

END_OF_DOCUMENT_TOKEN_TO_BE_REPLACED

Monday, October 19th, 2009
Newmarket’s under 21 hurlers progressed to the quarter final of the championship when they defeated Meelin by 3-14 to 4-9 in a thrilling contest at Meelin on Sunday.
Newmarket began brightly when Ian Flanagan clipped over a neat point in the second minute. Despite an encouraging start Newmarket were rattled in the fourth minute when a speculative Meelin effort ended in the back of the net and this was followed by a seventh minute point. Newmarket regained their composure and two John Ryan frees reduced the deficit but Meelin had the next two points to establish a 1-3 to 0-3 lead by the seventeenth minute. Newmarket hurled well throughout the field and were rewarded with a string of scores. John Lane pointed a free before Ian Flanagan added his second point. John Lane tied the sides for the only time with a fine point from play following some neat teamwork, at 0-6 to 1-3 by the twenty second minute. John Ryan gave Newmarket the lead and a minute later and their endeavour was further rewarded when Kieran Lehane finished to the net from the edge of the square. Meelin replied with a point but the excellent Robert Stack added a fine point for Newmarket. The sides exchanged points before the break with a John Lane point leaving Newmarket in front by 1-9 to 1-5 following an entertaining half of hurling.
Robert Stack finished well for the first point of the second half before Meelin got the next two points. Conor Cronin converted a long range free to re-establish a four point advantage. A turning point came twelve minutes into the half when John Lane on taking a close in free, elected to shoot for goal and he found the net for a crucial second Newmarket goal which he followed up with two more points. Meelin responded to this nine point deficit by gaining a second goal which was supplemented with a point. Newmarket were further boosted when some clever play from the inside forward line left Ian Flanagan bearing in on goal and he finished neatly for a third goal. A brace of points were exchanged as once more John Lane was on target. However, Meelin as expected came with a storming finish and two quickfire goals added to a climactic finish but Newmarket just held out and an excellent all round performance was rewarded with victory.
The Newmarket team was…
Paul Verling, William O’Flynn, John Scanlon, Timmy O’Keeffe, Brendan Stack, Kevin O’Sullivan, Nicky Flanagan, Conor Cronin (0-1), John Lane (1-6), Billy Daly, Robert Stack (0-2), John Ryan (0-3), Kieran Lehane (1-0), Denis McCarthy, Ian Flanagan (1-2).

Newmarket’s under 21 hurlers progressed to the quarter final of the championship when they defeated Meelin by 3-14 to 4-9 in a thrilling contest at Meelin on Sunday.

END_OF_DOCUMENT_TOKEN_TO_BE_REPLACED

Newmarket advanced to the final of the Duhallow Junior B Hurling league when they travelled to Meelin on Sunday morning and defeated the hosts in a close contest by 2-8 to 0-11.

END_OF_DOCUMENT_TOKEN_TO_BE_REPLACED

Newmarket recovered from a nightmare start to produce a stunning display to defeat Millstreet by 4-20 to 2-2 in the opening round of the Duhallow Cup played at Millstreet on Friday evening.

END_OF_DOCUMENT_TOKEN_TO_BE_REPLACED

Newmarket were defeated by Grenagh in the intermediate football league game played in splendid sunshine at Mallow on Sunday afternoon on a scoreline of 1-11 to 0-9.

END_OF_DOCUMENT_TOKEN_TO_BE_REPLACED

Thursday, October 1st, 2009
Clyda Rovers defeated Newmarket on Monday evening in an entertaining intermediate football league game played at Mourne Abbey where the game ended 1-12 to 0-9 in favour of the home side.
Bart Daly kicked a fine point in the opening minute for Newmarket but the home side responded by scoring three successive points by the end of the first quarter. Clyda added a further point before Newmarket enjoyed a productive period and were rewarded with points from T.J. Bodie, Nicky Flanagan and Shane Anthony Murphy which tied the sides late in the half. Clyda had the final score of the half to turn over in front by 0-5 to 0-4.
Clyda were more clinical upon the restart and added three points in seven minutes. John Ryan converted a free for Newmarket before Clyda regained a four point lead. Newmarket were resolute and produced some fine passages of football throughout despite a two month layoff. T.J. Bodie pointed to leave the score 0-9 to 0-6 at the end of the third quarter. Clyda had the next two points but Tony O’Keeffe and T.J. Bodie responded with points for Newmarket. As the game entered the final minutes a superb Newmarket defensive rearguard were eventually breached as Clyda struck for the games only goal. Maurice Feehan scored the final point of the contest as Clyda emerged from a fine contest.
The Newmarket team was Niall O’Connor, Pa O’Brien, Barry O’Leary, Brian O’Riordan, Michael Kenneally, Bart Daly (0-1), John Ryan (0-1), Timothy Murphy, Shane Anthony Murphy (0-1), David O’Flynn, T.J. Bodie (0-3), Maurice Feehan (0-1), John Lane, Tony O’Keeffe (0-1), Nicky Flanagan (0-1). SUB: David Quinlan.

Clyda Rovers defeated Newmarket on Monday evening in an entertaining intermediate football league game played at Mourne Abbey where the game ended 1-12 to 0-9 in favour of the home side.

END_OF_DOCUMENT_TOKEN_TO_BE_REPLACED

Congratulations to the Newmarket under 14 hurlers who completed the championship double last Sunday, following the defeat of Dromtariffe in the A final. 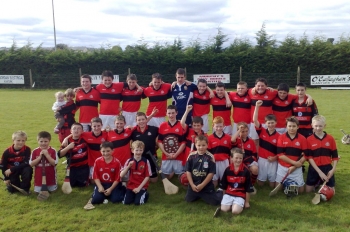 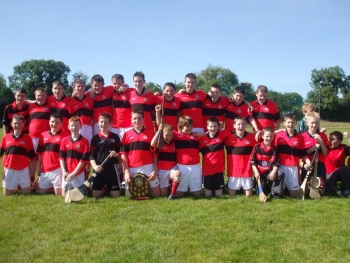 Two weeks ago the boys won against Millstreet in the B final after some late goals. This Sunday it took extra time to separate the teams, Newmarket running out victorious on a scoreline of 3-18 to 5-11. Congratulations to all the boys, their mentors and families. Additional photos can be found in the gallery.